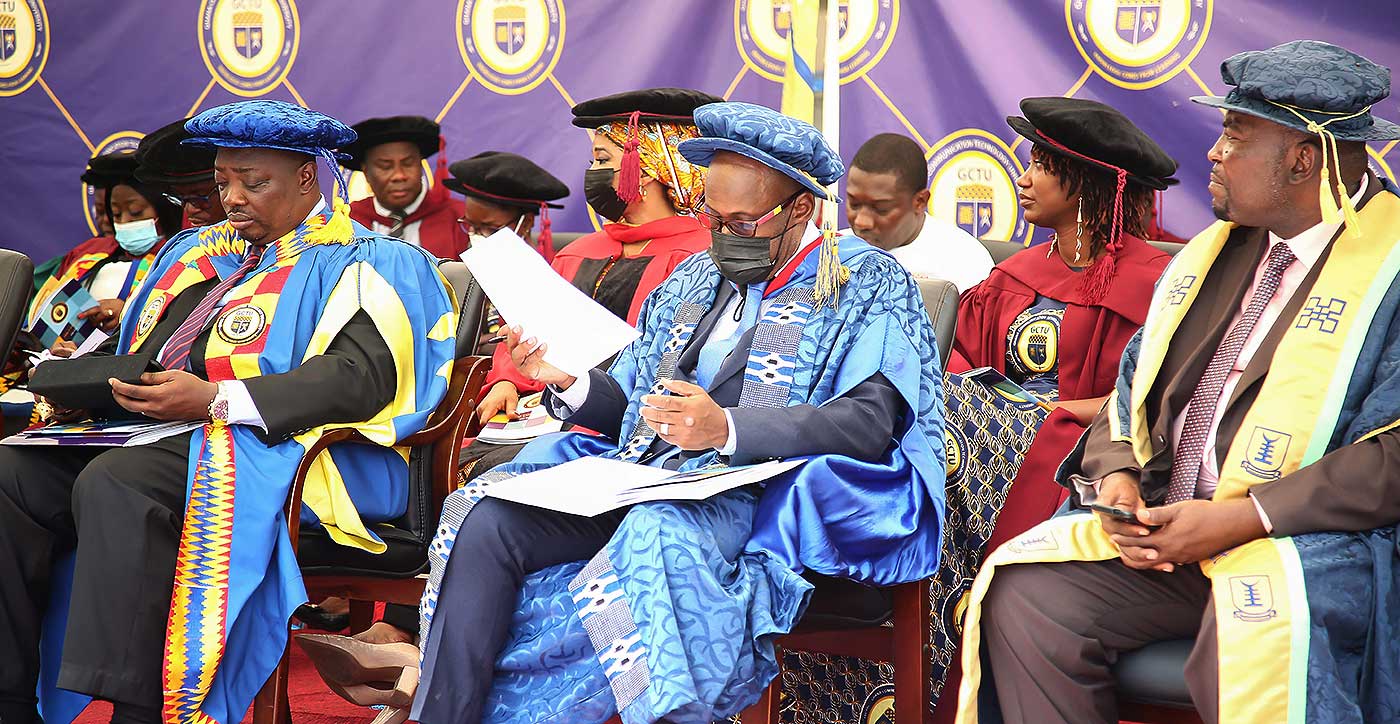 The main campus of Ghana Communication Technology University at Tesano in Accra went agog over the weekend as the university hosted its 29th graduation ceremony on Saturday, June 11, 2022. The excitement was palpable as the campus was turned into a jamboree by the graduands, their families and friends. The entire university community descended on the campus together with invited guests from Government, Industry and academia.

The Chairman of the University Council, Professor Kofi Awusabo-Asare, got the programme underway by welcoming all participants to the 29th Congregation which happened to also be the fourth since the University gained public status.

In his address to the congregation, the Vice-Chancellor of GCTU, Professor Emmanuel Ohene Afoakwa, gave titbits of the happenings within the university over the past couple of years. Among others, he touched on the investiture ceremony that officially ushered him into office as the first Vice-Chancellor and described the occasion as a “great milestone” in the university’s history.

He acknowledged the appointment of three key officers of the university – the Pro Vice-Chancellor, Professor Robert Ebow Hinson, who assumed office on 1st May 2022, the Registrar, Mr. Emmanuel Baidoo and Director of Finance, Mr. Ernest Yaw Awuah Apraku, who both assumed office on 1st June, 2022.

He also mentioned the creation of the Industrial Liaison Office which is part of efforts to enhance the student experience by bridging the gap between academia and industry. “The office will establish, build and maintain mutually beneficial relationships with industry players,” he said. According to him, the office has already signed some MOUs with some companies while others are being finalized. Some of the companies that have signed MOUs with GCTU are Jobberman Ghana, Developers in Vogue (DIV), Aya Data and the University of Ghana Medical Centre Ltd.

The VC spoke about academic collaborations which he said GCTU has excelled beyond expectations in the programmes undertaken at both local affiliate universities and international partners. He hinted the intention to seek support from GTEC to design postgraduate programmes and policies that will meet international standards.

The Guest Speaker for the occasion, Dr. Francis Boateng Agyenim, Director for CSIR, in his keynote address, pointed to the fact that the graduation was happening at a time of global crisis (a pandemic and economic downturn), which in itself should serve as a very useful learning experience for the future.

“Every impediment is an opportunity to learn, to grow and to adapt to change,” he said.

Dr. Agyenim implored the graduands to be grateful to their Alma Mater and be proud and celebrate their achievements.

To the faculty, he had this to say: “Thank you for bringing these future leaders to this point, you have done your work for them, but I trust you will continue to keep in touch with them and facilitate the development of their impending careers.”

Some of the dignitaries who graced the occasion were the Deputy Minister for Trade and Industry, Mr. Herbert Krapa, Dr. Francis Boateng Agyenim, Director of CSIR and Guest Speaker, Professor Charles Barnor, Pro Vice-Chancellor of UPSA and a Representative of the Vice-Chancellor of KNUST among others.